Nevertheless, the future is not easy to predict. Apparently antibiotic resistance, or resistant infection, is a huge growing problem. The first death in Norway due to resistant bacteria was in August this year. A woman came to Haukeland hospital with a burn and died 56 hours later because of eight resistant bacteria. It is estimated that by 2050, 10 million humans will die from this every year. This estimation is even higher than the cases of cancer, which is expected to have a 45% overall increase in the USA. Reports are also saying that chronic diseases related to diet and nutrition like obesity, diabetes, cardiovascular diseases, and osteoporosis will account for almost three-quarters of all deaths worldwide by 2020. 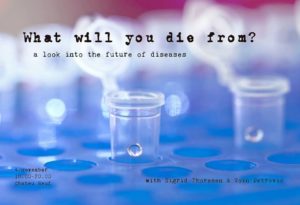 Luckily biotechnology is leading us forward. Gene therapy includes the use of genetic material in treatment purposes, or gene modification on humans. New, effective and safe gene therapeutic methods are now increasing. One of them is a technique called CRISPR, where special enzymes that can place genes on certain places in the DNA of the cell are used. The genes lifetime can also be estimated. This technique was newly used when Chinese scientists used gene editing on human embryos.

In the future gene therapy can lead to endless options for us. Still, we don’t know enough about how humans will respond to this unfamiliar technology. The ethical perspectives around gene therapy are therefore highly debated. We have the opportunity to not only save lives from deadly diseases, but also to enhance or modify other attributes like the sex of the baby, hair color and so on.

I’m afraid that this will result in a perfectionist view of our bodies. A view that does not include diversity and natural “flaws”.

Is there a chance that if we allow this, anyone can design their dream baby and that modified, enhanced children will be the new standard? The argument on whether or not something will remain “natural” might be out-dated. Maybe gene therapy is the next evolutional step for intelligent spices? If you think about it we would still be using the organs of animals to make insulin if not for genetic engineering.

And what about all the other things about ourselves that we can improve? What if we can stop or even reverse aging! There are species – like lobsters supposedly – that don’t age. Then maybe we will be able to live for centuries and have all the time in the world to come up with even better solutions.

It is almost impossible to grasp what this technology could mean to the human kind. Maybe we can make our bodies equipped for staying alive during long space travels and also adapt to foreign conditions on other planets. This could mean so much for other sciences! Not even the sky’s the limit.

Wouldn’t it be nice to buy yourself a high intelligence, a hot body and a ton of muscles? In this hypothetical situation it can be easy to abuse such extraordinary techniques, and not only by individuals – picture a totalitarian regime mass-producing an invincible army.

The problem then is that if we can hand pick which traits or features we think is healthy there is no knowing how the consequences will be in the next generation, not to mention the long term effects. What’s the outcome of “humans playing God”?

Traits we think is healthy are also a changeable social factor. Previously homosexuality, hysteria and homesickness (nostalgia) were seen as diseases. It is therefore not as objective as we like to believe.

And where would we set the limits? There is a difference between therapy and treatment, and improving humans, so maybe we should start there. Then there is the argument saying it is unethical not to use genetic engineering on human embryos with genetic diseases because we are then denying children the cure and more children will die. And using this technique can eradicate genetic diseases in families.

So yes, it is hard to understand and to decide on how to handle this growing technology and all its risks. Researchers still know too little, actually they only know a small part. Luckily (?) this drastic changes will not happen tomorrow, so we still have some time to establish a consensus on how to implement gene therapy, where to set the limits and to acknowledge the heavy responsibility.

On the 4th of November at 18.00 at Chateu Neuf, Sigrid Bratlie Thoresen and Voin Petrovic will talk further about gene therapy and the diseases of the future at the event “What will you die from?”.